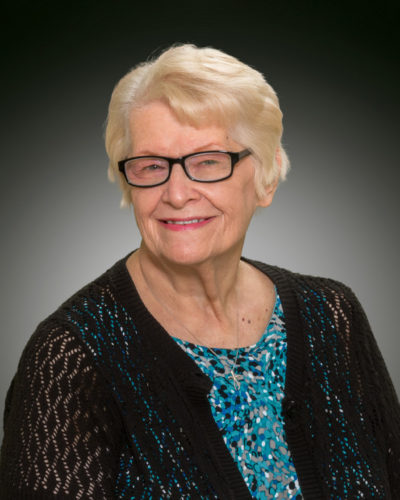 “For I am not ashamed of the gospel, because it is the power of God that brings salvation to everyone who believes: first to the Jew, then to the Gentile. For in the gospel the righteousness of God is revealed—a righteousness that is by faith from first to last just as it is written: “The righteous will live by faith.” – Romans 1:16-17

Mrs. Davis praises God for the many people involved in leading her to the Lord at an early age, and into an even closer walk with Him in her late teens. Her bookkeeping and secretarial skills were put to the test upon graduation from high school, when she managed a one-girl office for ten years. During that time, she met her husband, Keith.

Mrs. Davis served as a Church Secretary for fifteen years, assisted her husband in bookkeeping as he served as Church Treasurer, and for over 60 years she has both taught Sunday School and has sung in her church choir. Mrs. Davis was a secretary at a Christian School in Bloomfield, NJ for twenty-three years, and she has been at Hawthorne Christian Academy since 2005.

The Lord blessed Mrs. Davis and her husband with two daughters, who both became teachers in Christian education. Jodi has been serving the Lord for over twenty-five years in Christian schools and Word of Life in Korea and Japan. Nancy was a member of the first high school graduating class at HCA, and graduated from Philadelphia Biblical University (now Cairn University). She has taught junior high and lower school for many years; Middle and High school Spanish at HCA; and presently assists in a Special Ed program. She is a busy mother of three, a Women’s Bible study teacher, and a church secretary.