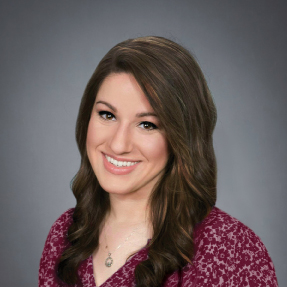 Tina attended Hawthorne Christian Academy from kindergarten through twelfth grade. She returned to HCA in 2015 as the Advancement Team’s Communications Coordinator, where she got the word out about HCA through publications (such as The Chimes and the HCA Viewbook), graphic designs, the Link, press releases, and social media.

Tina continues to get the word out about HCA as the Director of Admissions and Marketing. She promotes HCA to prospective families through tours, interviews, and support throughout the admissions process, and markets the Academy through The Chimes, Viewbook, and other design pieces. Tina loves being on the HCA Administration and working alongside beloved brothers and sisters in Christ (some of whom were once her own teachers). She considers herself to be HCA’s biggest fan, and loves to share her enthusiasm and love of HCA with our new families!

Tina met her husband, Noah, while attending Nyack College. The couple now lives in Mahwah, NJ, where Tina grew up. Tina loves to sing and play piano (a passion inspired by the HCA music program), draw and paint, crochet, and spend time with her family (including her brother, Joey, who is also an HCA alum).